SKYBEACH – A sprinkling of magic dust in the heart of Paceville

For generations of revellers, Kevin Decesare is a household name. Having taken on the family’s hospitality business back in the early eighties and effectively turned it on its head, it would be safe to say that he was one of the first ever pioneers who has shaped Malta’s entertainment scene into what it is today. Starting out with what was Paceville’s first ‘real’ discotheque, complete with lit up dancefloor, Styx as it was then called, delivered the very first taste in great entertainment, complete with a venue to match, to thousands of party-goers.

Fast forward more than three decades later, during which time the Decesare empire has scaled new, unprecedented heights in both the hospitality and entertainment business. But now, Kevin is about to launch a brand new project, Sky Beach; a unique, luxe venue situated on the top of the Intercontinental Hotel. Boasting of a magnificent infinity edge pool, against the striking backdrop of St.George’s Bay and beyond, a state-of-the-art, Bose sound system, plus a minimalist, drop-dead gorgeous design, Sky Beach is a chillaxing haven for long summer days, right in the middle of the island’s busiest areas.

We met up with the man himself in a bid to understand, how and why Sky Beach will become the ‘in’ place for several summers to come. We launch our interview with the obvious…What’s the concept behind Sky Beach? “This came about when we raised the bar even higher for the 5* Intercontinental Hotel. Truth is, competition is rife in this business and not being directly on the waterfront could prove to be a disadvantage, though, that said, Paranga is probably one the best beach restaurants on the sand on the island. Nevertheless, it was time to take it up a notch and basically, that was how the Sky Beach concept came about. Sky Beach will offer something so unique and high-end, that people will want to make it their summer destination, not somewhere where they just happen to stumble upon,” Kevin explains.

It all started out with the refurbishing of the hotel’s fifteenth floor and the new club lounge. The next two floors came next, creating a cluster of 6* luxury suites. In a genius bid of design magic, the sixteenth floor, remained as a service floor, servicing both the levels below, as well as the new seventeenth and eighteenth floors, leaving the nineteenth, the actual roof, unencumbered – a vast, empty space wherein future projects could come into existence. Soon after, Sky Beach was born.

Kevin Decesare has been in the club industry since his early twenties and has seen the scene rapidly evolving over the years, “In this business you either move with the times and stay relevant, or else it’s time to hang up your gloves,” he says. “There is a gap in the market and with Sky Beach I chose to provide for that. The people, who choose Cannes or Porto Cervo as their summer destination; in short, people who are looking for a top-quality experience, need to be catered for locally. Obviously, cutting edge design, a huge budget as well as staying power are a must, to be able to create and execute such a project successfully. With Sky Beach, I believe we have managed to tick all the boxes,” Kevin says.

With only sixty-eight sunbeds and a mere handful of aesthetically lush gazebos catering for differently sized groups, strewn over a massive area, Sky Beach, definitely does not cater for the masses. Indeed, it is a sumptuous oasis for those who value their privacy and downtime and want super-luxe amenities to match.  To keep in line with the opulent setting and much in the gastronomical tradition of the Intercontinental, the food on offer at Sky Beach is to die for, sourcing the best produce from all over the island, effectively developing the initial idea of a pool bar into a full-blown restaurant, serving both lunch and dinner.

The only way to keep the venue’s high-end status is to only provide access through membership, “Sky Beach is intended for a particular type of patron, there are no two ways about it. The type who is willing to pay good money, but who naturally expects impeccable service and amenities, as well as an extraordinary ambience, away from the clamouring crowds. The only way we can ensure this is through membership,” Kevin says matter-of-factly, “The whole concept is to have a number of individuals, who are not looking for a raving club scene but a more chillax type of experience. To this end, even the music has been chosen with this in mind.”

But Sky Beach is not just an exclusive day experience…With the setting sun, it transforms into one of the most scenic and vibrant restaurants and bars on the island, where one could enjoy a great meal or a few drinks in its opulent setting. Corporate events are also on the cards, “This I believe, is the ultimate venue for corporate parties, people for whom networking is not simply part and parcel of the job, but also a great way to socialise in a unique and top-notch ambience,” Kevin enthuses.

With another success in the making, and with a huge history in the entertainment business, what’s his take on the industry so far? “I believe that our country is going places – if we put our heads together we can achieve great things, identify how to make this industry much stronger, better and even more successful than it already is,” Kevin ends with a smile. 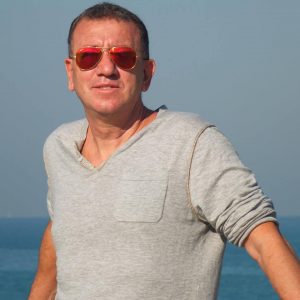 Now coming up to its fourth year, iGaming Idol certainly needs no introduction. Now a mainstay on the gaming industry’s social calendar, iGaming Idol is an innovative awards event which seeks to celebrate the outstanding talent, passion and achievement of the rising stars within the industry, actively promote charity fund raising to benefit the greater […]

How do you celebrate summer in sizzling style? Here at Ambassadör Events we got creative for our friends at Evolution Gaming and came up trumps. Entrusted with such a huge event, we had to come up with some extra magic to create not only a party atmosphere, but an original and unforgettable one. We set […]

Kudos to our sponsors who have helped make it so spectacular!   It’s been a long, hot summer; but here at EBM, it has been one of our hottest on record, an awesomely sizzling Summer 17, choc-a-block with our fans’ favourite events. Happening every week throughout the season, we have come up with a […]

Do You Have An Event
That Needs Planning?